Below are some of the interesting project related jobs that we have undertaken in the past 4 years :

July 2020  Hoisting, Transport, Erection And Moving Huge Tanks From One Factory To Another

In mid July 2020, Kim Soon Lee Project team was awarded the complicated job of hoisting, transporting, erection and moving of 2 huge tanks from one factory in Tuas to another.

Everything went according to plan. In fact, the job was completed in a shorter time than the expected time, exceeding our customer’s expectations. 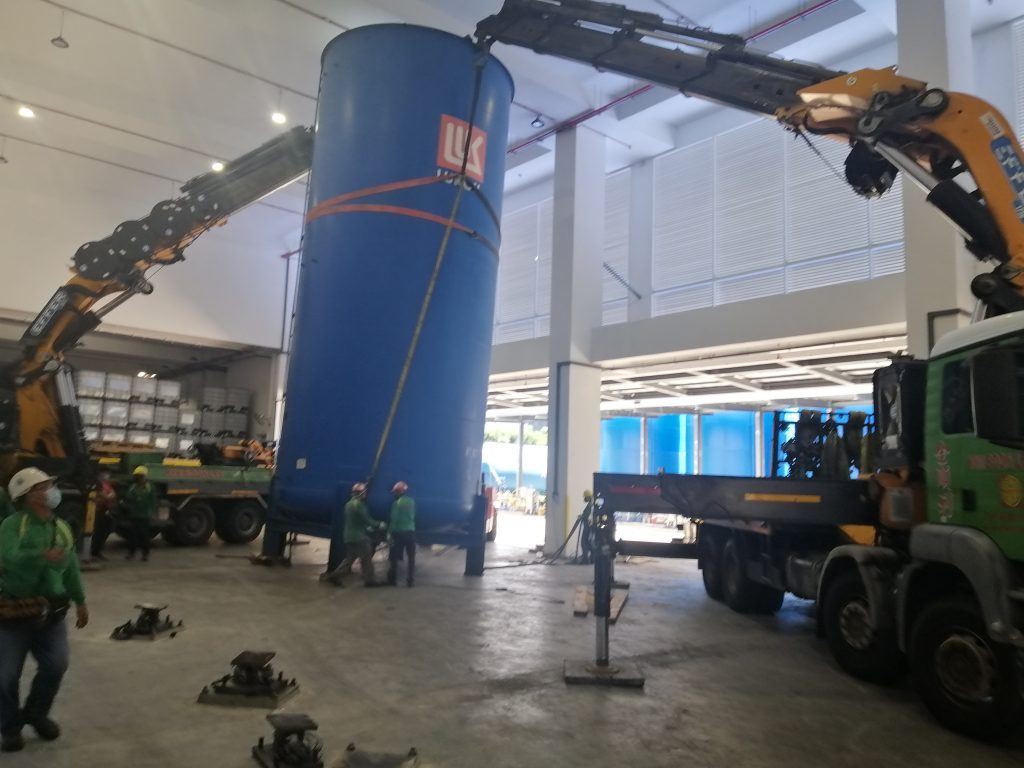 The numerous Singapore Dormitories was one of the Epicentre of the CoronaVirus. In the month of April, Kim Soon Lee was consigned by a Container making company the job of transporting and unloading numerous tailor made Office Containers to the Dormitories. For once, the challenge is not with the job itself, but with the personal protection given to our staff performing it. As this period was the peak time of the virus, special care had to be taken to ensure that none got affected.

In all, more than 40 Containers of all shapes and sizes were transported and unloaded in the various Dormitories in Singapore within a short span of 4 weeks. And we were proud to say that none of our staff working on this big project was affected by the Virus.

April 2020 was regarded as being almost the peak period of the COVID 19 in Singapore. One of the Commodities in demand then was Face Masks. In early April, Kim Soon Lee received a large consignment involving the trucking of numerous 40ft Containers, their unstuffing, repacking and subsequent delivery of masks to various locations in Singapore.

One of the challenges we faced then was time. The job had to be done within a very short stipulated time as Face Masks were in short supply in many places. The next issue was manpower. The Stay home notice has affected many of our workers and this greatly reduced our ability to perform it the way we like to. To fulfil our commitment, we have to enlist all the staff we have in our disposal, including office people and drivers plus to reschedule them to work in rotating shifts.

Tough, tiring and stressful this exercise proved to be, the whole job was completed in time and particularly fulfilling as we were able to contribute to society too. 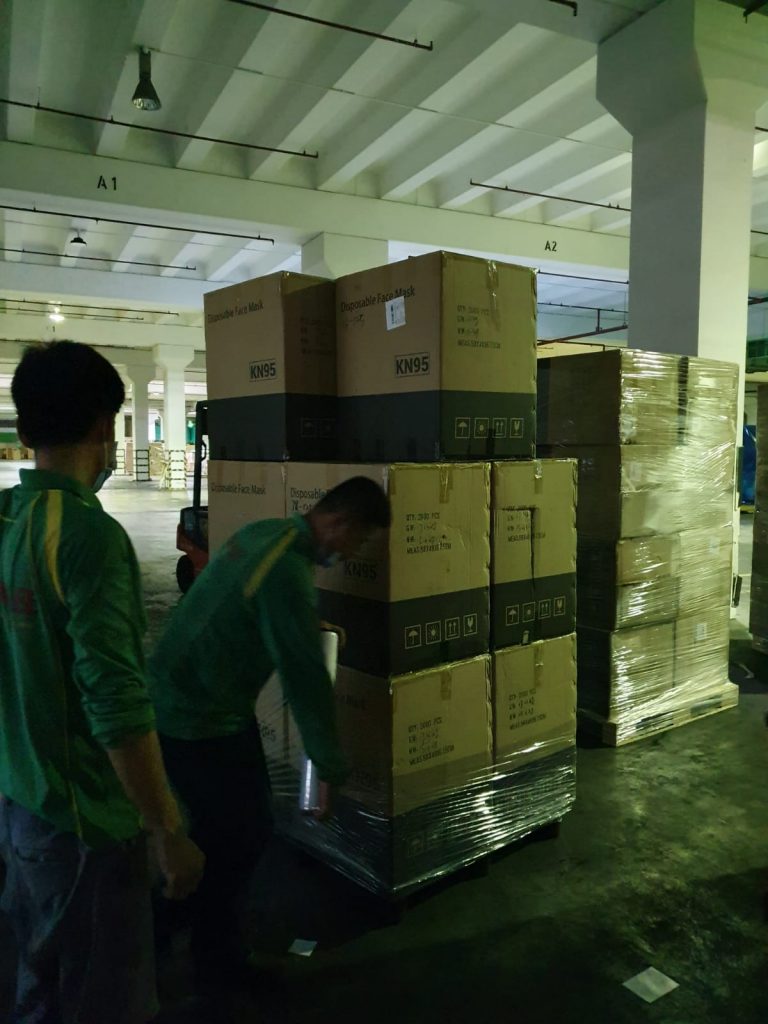 In January 2019, Kim Soon Lee won the job to transport, install, fit and fix structures and fittings belonging to the Spartan Race that was to take place in the National Stadium.

The Spartan Race is reputed to be the largest Global obstacle course that involves a wide array of challenges aimed at pushing one’s physical ability to the limit. Contestants are expected to run, climb, push, pull, throw and crawl through walls, hills, trees, mud, barbed wire and other obstacles. So one can imagine the amount of objects and items Kim Soon Lee has to transport, move and position.

A wide array of vehicles and equipment such as Forklifts, Mobile and lorry cranes, Trailers and Lifting personnels were therefore activated to effect the above job. Time was of essence as there was a tight deadline set for the installation and dismantling processes. Kim Soon Lee is proud to announce that we completed the job ahead of schedule, much to the delight of our customer. 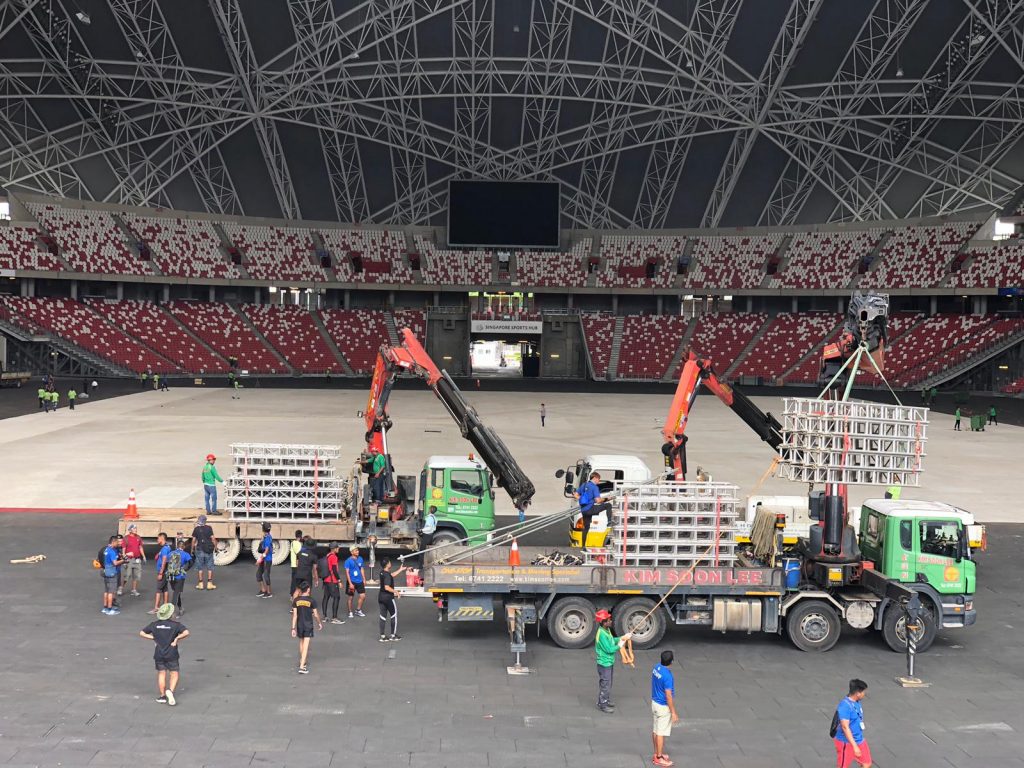 We were awarded the job of transporting containers, generators, fun fare trailers and other accessories for the huge Fun Fare that took place at the empty field next to Marina Bay Sands hotel in early 2018.

Our duty were not restricted to just transportation, but also the erection and assembly of the different rides and office/ticket booths.

Time was an essence as there was a small window period given to us for the job. And our customer was not let down as our huge contingent of vehicles was able to deliver what they need. 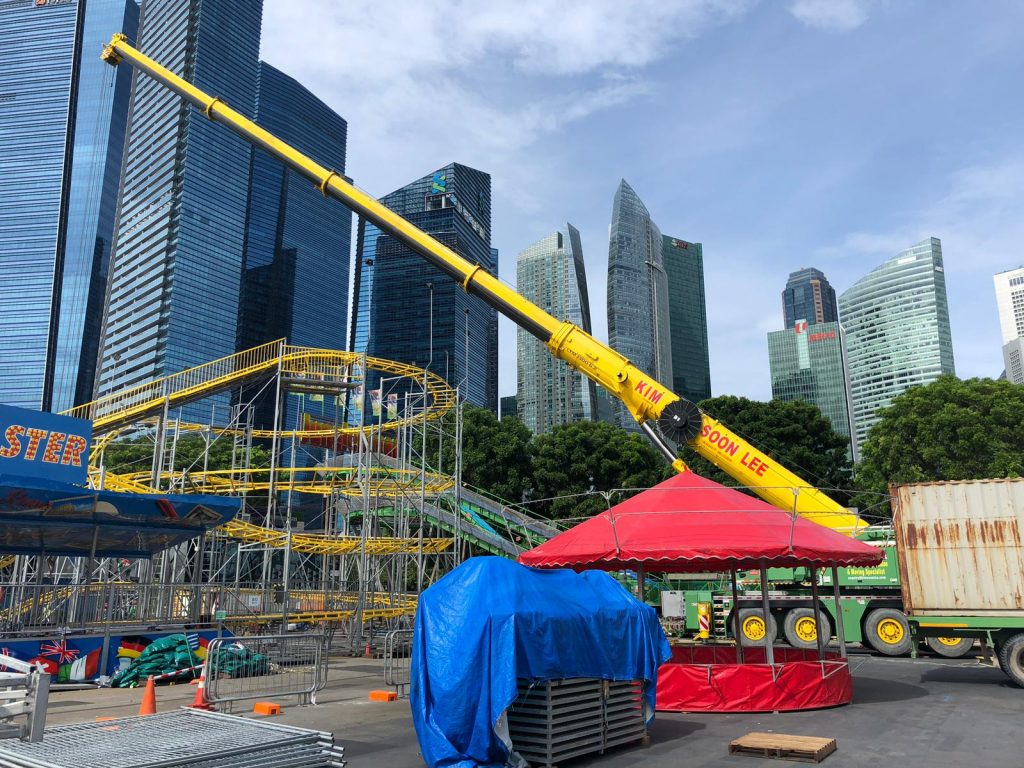 In early December 2017, we were contacted to perform yet another Large scale machine moving jobs. Numerous large CNC machines have to be moved, packed, crated and transported from a plant in Woodlands to the Port for export.

Due to some special arrangement between the sellers and buyers of the machines, we were only given a very short time frame to perform the whole job.

Huge machines, biggest being 35 tons were moved, lifted and lashed on Flatrack containers. After that, they were trucked to port with Police escort.

In all, 11 units of containers, mostly Flatracks, were used and the job was completed one day ahead of schedule.

May 2017 Transportation, Stuffing and Trucking Of Lamborghini Gallardo

Kim Soon Lee is not just renowned for the handling of big or huge items. Often, we are entrusted with the responsibility of moving delicate and costly “mid sized” items such as luxury cars.

Such cars are transported to our yard via specialised trailers.  Our guys will unload them, store them aside, then stuff them into container when the time comes. Professional choking and lashing of the car, to prevent any movement of it, would be done and the whole container is ready for export.

Easy job – it might seems to any untrained eyes. In reality, lots of experiences and know-how on cars are required for such jobs to be done safely and professionally. And Kim Soon Lee has them all. 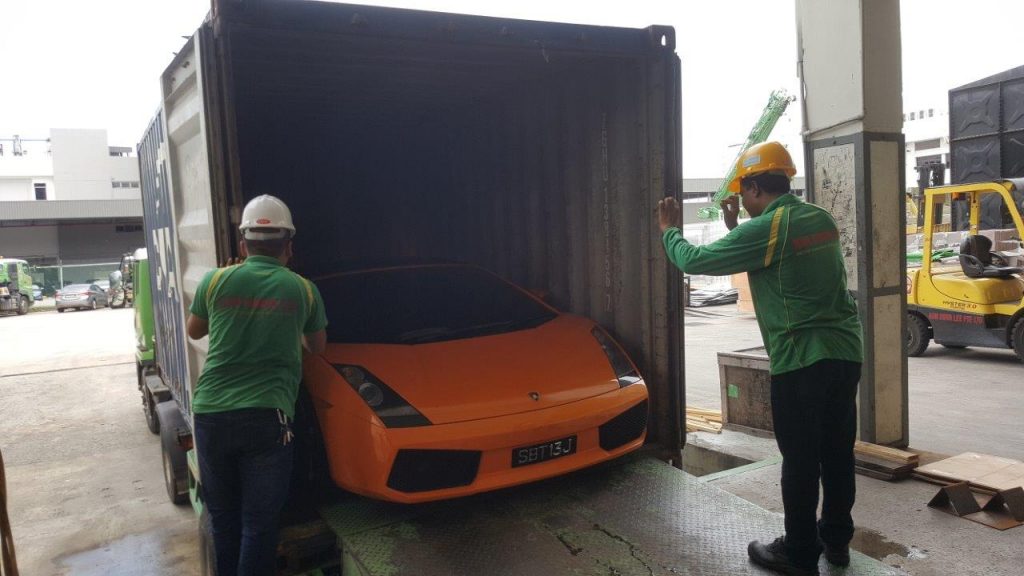 In late November 2016, Kim Soon Lee was contacted by the temple authority of Sri Shiva Durga to clear, unstuff, transport and position the statue of Indian deity; Lord Shiva from the port to their temple in Potong Pasir.

The greatest difficulty of performing this job was the very limited time given. From the time we were informed of it till its completion, we only had 4 days as a consecration ceremony of the statue was already planned on the 4th of December.

The statue was crafted in India and exported via a Flatrack container to Singapore port, which we truck to our yard in Bedok. Thereafter, we proceeded to unstuff the cargo from the Flatrack container and uncrate the statue inside our warehouse. Great care was taken to ensure that nothing was damaged.

The following day, the oversized statue was loaded onto a lowbed trailer in a horizontal position, then transported via escort to the temple at Potong Pasir at midnight. There, 2 cranes and our teams of experienced lifting personnels and movers awaited the cargo to arrive, where it was unloaded, tilted then eventually positioned to the required place. Our cranes and manpower had to perform this job despite the very limited space available on site.

The temple went ahead with the consecration of the statue 2 days later and this event was officiated by Singapore’s minister K Shanmugan. Kim Soon Lee is glad that we contributed to the success of this event. 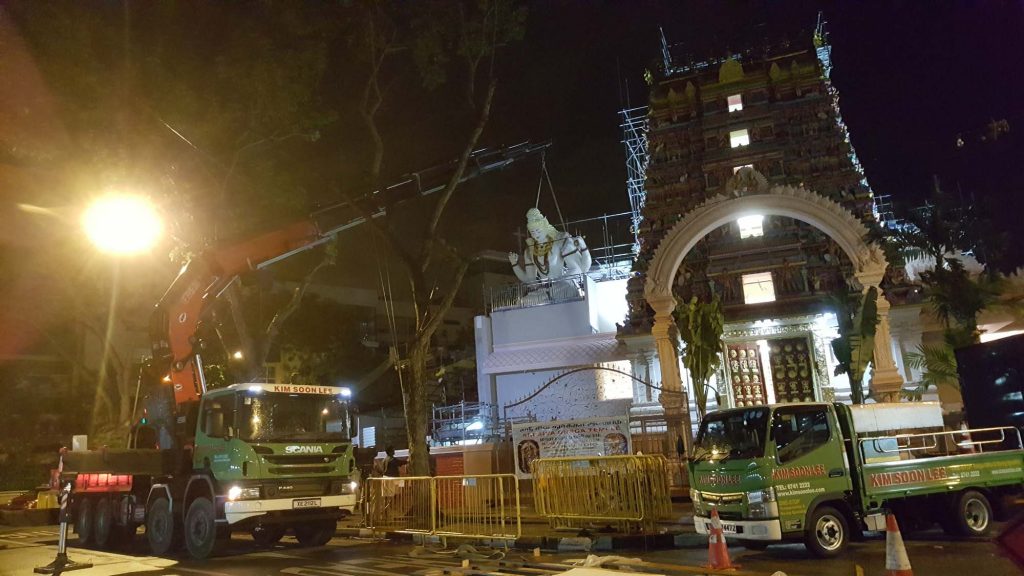 In late October 2016, Kim Soon Lee was awarded a six-figure valued project for the moving and transportation of a huge 130 tonne Caterpillar machine in Tuas. The magnitude of this job was huge with lots of meetings and discussions taking place to map out a time frame and method of doing before it eventually commenced.

In essence, the job involved the dismantling, shifting out, transportation, cleaning, packing, storage and eventual export of the different parts of the machine. None of Kim Soon Lee’s Operation Department was spared of their involvement in this job.

From Manpower Department to Mobile crane, from Forklift rental to Heavy trailer transport and from Warehousing to Container trucking, the steady progress of this job epitomised the very core strength of Kim Soon Lee – the provision of a reliable and One Stop logistics solution to our wide range of customers. 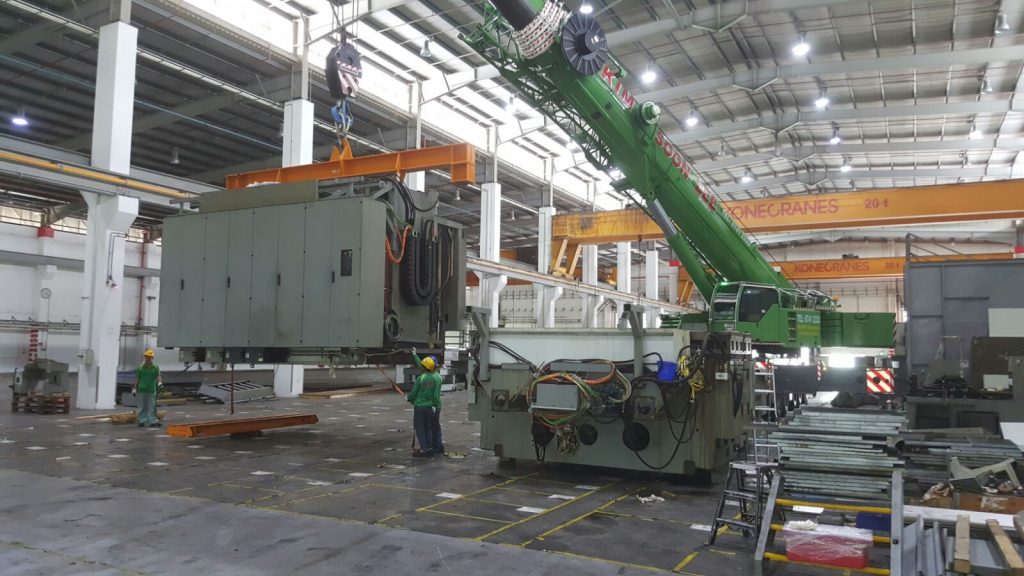 In September 2016, Kim Soon Lee was subcontracted the job of providing “decorative trailers” with Prime Movers to tow them in the annual “Nine Jade Emperor” (九皇爷) Procession. Five Prime Movers and trailers were used for this whole event, stretching two weeks, with most days ending in the wee hours.

In addition, Kim Soon Lee also sponsored our Eunos yard to the organising committee for their decoration of the involved trailers. 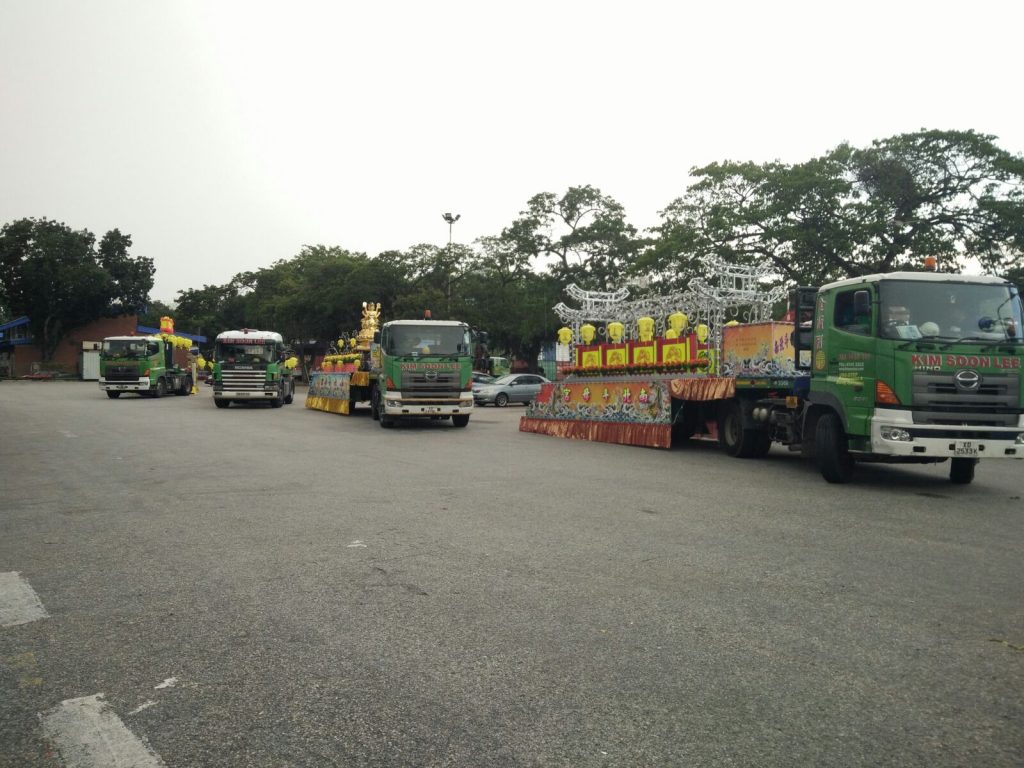 May – June 2016 Trucking, Unstuffing, Storage, Delivery And Positioning Of 5 Tonne Sculpture At SUTD

In mid 2016, Kim Soon Lee was contacted to perform the job of collection, storage and positioning of a delicate 5 ton sculpture at Singapore University of Technology and Design (SUTD).

The greatest difficulty of this job is the site access at SUTD. The sculpture was to be positioning in the middle of a Garden and this Garden was located within the school compound, where everything were already built up. So to move and navigate a 5 ton cargo through a heavily built up area was no mean feat.

Lots of preparations were undertaken to protect all the existing flooring and in some cases, reinforcements were made so that the ground can take the weight of the sculpture as it moved along.

As if this was not hard enough, the organiser wanted the sculpture to be positioned on top of a solid granite stand measuring one metres tall. So our Project Staffs had to go back to their drawing board and come up with a feasible yet safe method to get the job done.

After numerous discussions and evaluations, a method using a heavy forklift and labour the job was agreed upon. The job commenced in early September, where the cargo was transported from our storage yard to SUTD using lowbed trailer.

Thereafter, it was unloaded by crane, then shifted and positioning to its final required location, in accordance to our method proposed. Everything went well and the sculpture made it in time for its opening a few days later. 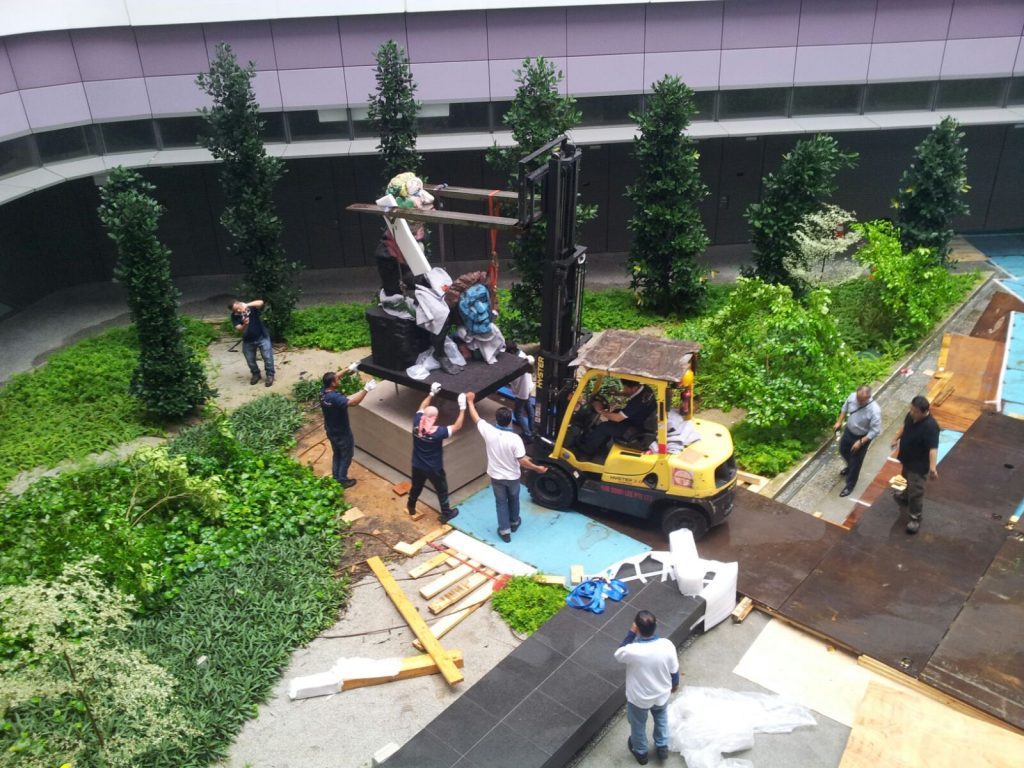 In February 2016, Kim Soon Lee was contacted for the transportation and positioning of 10 units containers at the Open Space area in front of Ngee Ann City, Orchard Road. These containers were meant for the exhibition of a particular Car Brand.

A few challenges awaited us in this project..

Site access was an issue as Orchard road is a very busy area with lots of people and vehicles walking and travelling around. Everything had to be done at night.

Another obstacle was the “Ground Bearing Capacity” of the floor in that area. Great caution has to be taken to ensure that the equipment we use do not add “excessive” weight on the ground as there are underground basements beneath it, yet strong and safe enough to lift the containers to the desired places.

Some of the containers contained brand new vehicles in them, stuffed at Kim Soon Lee yard before transporting to the site. Great care had your new taken during hoisting as any tilting might result in damages to these luxury vehicles. To worsen matters, some of the containers had to be stacked three storey high.

Lastly, time as usual, was also a limiting factor as there was a very short window period given to us to position and remove the containers at Orchard road.

The crews of Kim Soon Lee worked tirelessly to come up with solutions to each of the different challenges posed to us. We were happy that all the schedules were met and the client were left satisfied with our services. 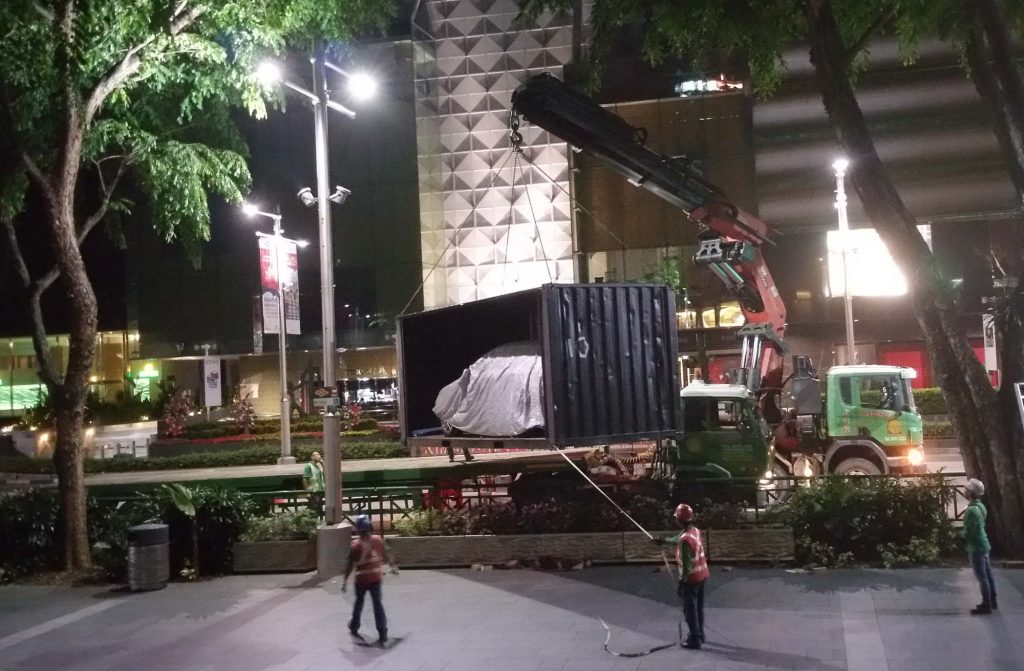